The house is relatively intact from the time it was built, with the exception of a new entrance in "neo-baroque" style, designed by architect Loretz Harboe Ree in 1918.

A stately single-storey facility was built on a high wall with a garden below. Information in 1723 shows that the main farm was operated on Austad. In 1730, Austad was sold to the lawman at Agdesiden, Christian Braunmann. The focus was on sawmills and mill operations. After his death (1737), the widow Kathrine Krefting sat on the farm until her death in 1771. Her son Christian Krefting jr., who took over in 1770, soon went bankrupt. In 1779, merchant and shipowner Peter Møller bought Klein Austad at auction. Even now it was the widow, Anne Cathrine Lohrmann, who ran the farm. She died in 1793. In 1784, her daughter Kristine Marie Klein married the rich Skienskjøpmann, Peder von Cappelen, who took over Austad. They lived on Strømsø, and Austad was used as a pleasure farm and breeding farm. In 1807, the old farmhouse, which was in a very dilapidated condition, burned down. Peder von Cappelen and his wife built the current buildings. They were prominent figures, and in 1814 the Crown Prince's regent, Christian Fredrik, visited their newly decorated country residence Austad.

In 1842, Austad and adjacent estates were bought by Cappelen's heirs by merchant and shipowner Hans Kiær. Hans Kiær and Cathrine Holst built a large house on Austad. The farm was owned by the family until the last private owner, Tom Kiær, had to give up in 1928. The farm's lands were then laid out as residential plots. The new owner was Skoger municipality, which donated Austad to Drammens Museum when the municipality was merged with Drammen in 1964. In 1967, Austad opened as a museum, with furniture and equipment from the museum's collections. Buildings, garden and museum Of Austad's old farm buildings from around 1700, the basements remain. It was a well-equipped wooden-winged house on one floor. The house that came up after the fire in 1807, was laid on the former basements. It is a austere classicist building with smooth tablecloths that imitates plastered walls, and a columnar salit with a temple gable in the "Palladian" style. The columns are iron drums cast at Eidsfoss ironworks. During the construction of the house, Swedish prisoners of war participated. The garden was extended to a large park, which is still preserved. The house is one of the most beautiful private residence buildings in "modern" style in Norway in the first part of the 1800s. The kitchen is on the basement floor. The house is relatively intact from the time it was built, with the exception of a new entrance in "neo-baroque" style, designed by architect Loretz Harboe Ree in 1918. The outbuilding, which was in a large open horseshoe shape, burned during the war. 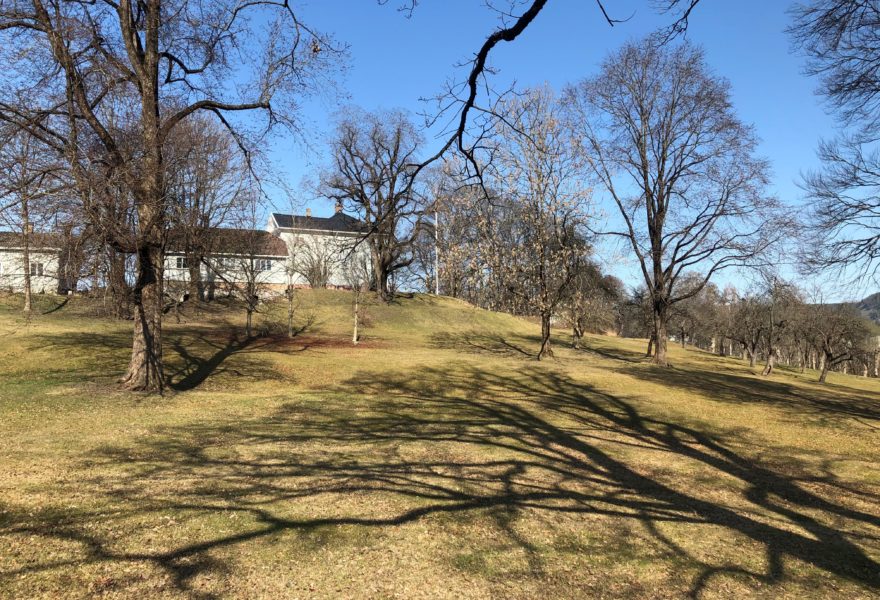